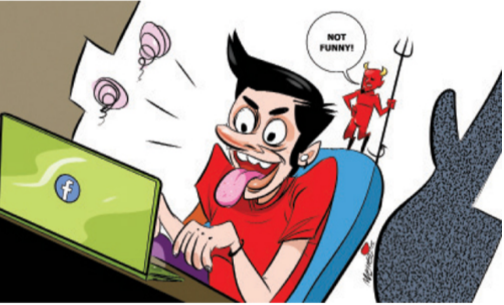 During last year’s football world cup, after Spain’s big defeat with Netherlands, I saw about 50 status updates on social media which were all different variations of this: Spain has been raped by Netherlands. As the World Cup continued, a steady stream of rape analogies went on to be used by young sports enthusiasts on social media. In this case, rape was considered to be a testosterone-driven victory. Are Bangladeshi youth really equating rape with triumph? Is it not atrocious how they consider the victory or defeat in a game to be similar to sexual assault! Another instance where the word rape is thrown around casually is when someone’s Facebook account gets hacked, which is otherwise termed by youths as Frape – Facebook rape. The amusement with which users comment ‘You got fraped!’ is appalling.

It would appear that it has become quite common for young people to trivialise sexual assault to the extent where they liken it to everyday disappointing situations in life. One time, a classmate reacted after getting reprimanded by the professor, by exclaiming ‘I absolutely got raped!’ When I called him out on his inexcusable reaction, he appeared completely unaware of the fact that he had said something wrong. He justified it by saying, ‘No, I am pretty sure that is what it is like to get raped.’

The word ‘rape’ is also thrown around casually to degrade women. One time, I overheard someone commenting about a girl they were annoyed with by saying, ‘She is so irritating I would not even want to rape her!’ These are statements made by the so-called ‘urban youth’. Young, intelligent and well-educated people who will have significant contribution to the country’s future, are saying such despicable things. Also, it is not just men who are to be blamed. Young women too are using ‘rape’ as a metaphor to describe ordinary, day-to-day disconcerting things.

All these cases are examples of how rape culture is persisting among our youth. Rape culture is one in which rape and sexual assault becomes normalised due to societal attitudes about gender and sexuality. Here, the word ‘rape’ is used to describe mundane, non-traumatising experiences. As a result of which, the act of sexual violence itself is trivialised. The word loses its power to the extent that when actual rape is discussed, it becomes less meaningful.

In case of sports, two teams mutually agree and consent to the act of playing a sport and are aware of the possibility that one team might lose. However, the very definition of ‘rape’ says that it is non-consensual. It is an act committed against the will of the victim. Scoring a goal is definitely nowhere similar to getting violated by another human being. Someone hacking your Facebook account is also in no way as disturbing as an experience like rape. All these cases are what help propel normalisation and trivialisation of rape culture in our society.

Many will roll their eyes and ask me to calm down with this feminist agenda of being offended at everything. But this is not a trivial matter. How is rape anything like the scenarios I mentioned above? Repeated misuse of such metaphors continues to spread myths about rape and sexual assault experiences. Here is why you should choose your words more carefully.

Sexual harassment in Bangladesh is so widespread, that according to a study titled ‘Eliminating Sexual Harassment of Adolescent Girls in Bangladesh: A Comparative Analysis of Multi-level Strategies’ by Kristan Bakker, 91 per cent of the girls aged 10-18 have experienced it. According to Bangladesh Demographic and Health Survey, 2007, 53 percent of women in Bangladesh experience physical or sexual violence by their husbands at least once in their lifetime. The United Nations Multi-country Study on Men and Violence says, 89.2 per cent of urban Bangladeshi men agreed or strongly agreed to the statement ‘if a woman does not physically fight back, it is not rape’. So you can see how clouded our perceptions are and how wrong the youth are regarding these issues. Hence, it comes as no surprise that they use the word ‘rape’ for such frivolous purposes.

Using the word in such casual manner can be at best upsetting, or at worst traumatising for rape survivors. Moreover, by repeated use of the word, you normalise the idea of the heinous crime for potential perpetrators of rape or sexual assault. You might laugh and think that no one on your friend list can commit such a horrendous crime. Do you think rapists are social outcasts who only lurk in dark alleys? Believe it or not, over 80 per cent of sexual crimes are committed by someone the victim knows.

Some might say that it is all semantics and no one means any harm with it. Some may even argue and claim that it has no influence on our societal perception of sexual assault or rape. However, I firmly believe that words have a big impact on our lives. I think that continuous misuse of the word affect or hurt the sentiments of the people who have gone through the experience. Freedom of speech does not emancipate you from consequences. ‘Rape’ must not be used to describe anything other than a non-consensual act of sexual violence. Rape is not a metaphor – it is a very tangible, frightening experience that happens to far too many people. The least we can do to show minimum amount of decency as a human being is not trivialise such a horrific crime.